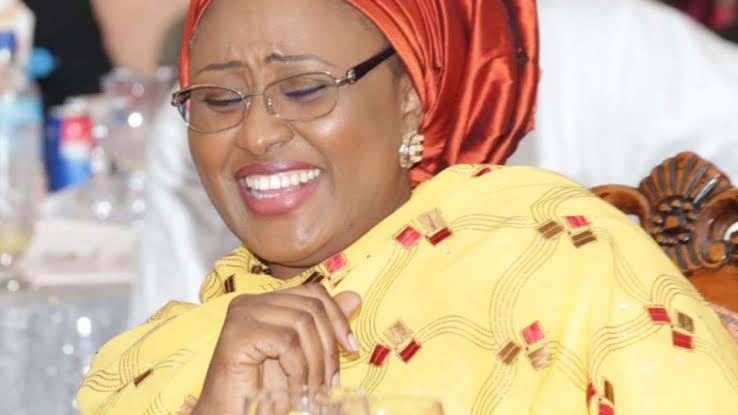 Aisha Buhari, the wife of President Muhammadu Buhari, has been issued an apology by the National Association of Nigerian Students for the detention of Aminu Mohammed, a student at the Federal University of Dutse Jigawa, by the Nigerian Police.

Condemnations had followed Mohammed’s alleged detention over a tweet about the First Lady. Aisha Yesufu, a well-known social activist in Nigeria, came under fire for allegedly abusing her position to harm the student.

According to NANS, Mohammed was actually detained by the Federal Capital Territory Police Command after being tracked to Jigawa, as opposed to the Department of State Services as initially reported.

NANS in a statement on Tuesday by its President, Usman Barambu, apologised on behalf of the Nigerian students to the First Lady, while also calling for Mohammed’s release.

“The leadership of NANS received with concern the news of the unlawful arrest of Mohammed by the Nigeria Police on the instruction of Aisha Buhari. Upon receiving the news, I, Mohammed’s family and friends swung into action to trace the whereabouts of Mohammed. After some days of searching, we got the information that he was at the police unit in Wuse Zone 2. I met with Mohammed at the police custody.

“It was alleged that Mohammed some weeks back posted Aisha Buhari’s picture on Twitter with the caption “Su mama anchi kudin talakawa an koshi” (translated from Hausa to ‘the mother has gotten fatter by eating masses’ money’).

“Just like the normal way angry citizens have different ways of expression on the social media. On November 18, 2022, the police from Abuja tracked Mohammed to the Federal University Dutse and picked him without any written/verbal invitation or informing the school management or his family,” Barambu narrated.

The NANS President said Mohammed was taken straight to the Presidential Villa where he was allegedly brutalised, beaten, maltreated and humiliated by the police “on the orders of Aisha Buhari, after which he was unlawfully detained at a police facility at Wuse Zone II till date. I, alongside our team of lawyers, met with Mohammed at the police facility where he confirmed the incident to me. Until now, Mohammed has not been arraigned by any competent court of law or granted bail by the police.”

“We want to, on behalf of all the Nigerian students, tender our unreserved apology to the First Lady Aisha Buhari, for the action of Mohammed which might have caused her and her family pains. However, as leaders and public office holders, we must overlook some criticisms if we want to really forge ahead and do the right thing,” Barambu said.

“We demand a detailed explanation by the Nigeria Police on why they will go to the school premises and ‘kidnap’ a student without due process and took him straight to the Presidential Villa where he was brutalised which violates his fundamental human rights,” the statement said.

NANS said Mohammed had sustained various injuries and had not accessed any proper medical attention. “We call on the police as a matter of national interest and urgency to release Mohammed unconditionally or be prepared to face the Nigerian students.

“However, we are calling on our teeming students to be careful and apply decorum in dealing with people especially our leaders. They should be mindful of what they post on social media.

“We want to inform the general public to be patient as we await response and actions from the Inspector General of Police on a letter earlier sent to his office,” the president added.

Disagreeing with the President, the National Public Relations Officer of NANS, Giwa Temitope, in another statement, condemned the alleged action of the First Lady, saying Mohammed’s rights were grossly violated.

“The conduct of Aisha and the security officers involved in the brutality meted out to Mohammed is highly condemnable and shows that Aisha does not tolerate dissent. In a democratic dispensation, one would have expected the wife of the President to have instituted a case against the student (if at all there is any) rather than resort to violence.

“In so far it has been established that the student was ‘abducted’ by the police and then ferried to the Presidential Villa where he was tortured on the order of Aisha and then locked up at a police facility at Wuse II, the wife of the President and everyone involved have erred and violated his (Mohammed’s) right to dignity of human persons as guaranteed under Section 34 of the Constitution of the Federal Republic of Nigeria, 1999 (as amended).

“Our position as an association is that the wife of the President has exhibited conduct against the provisions of the Nigerian law which has therefore invalidated whatever case they might have against him,” Temitope said.

You Are Ridiculing Your Position As A Senior Advocate of Nigeria, LP Tells Keyamo