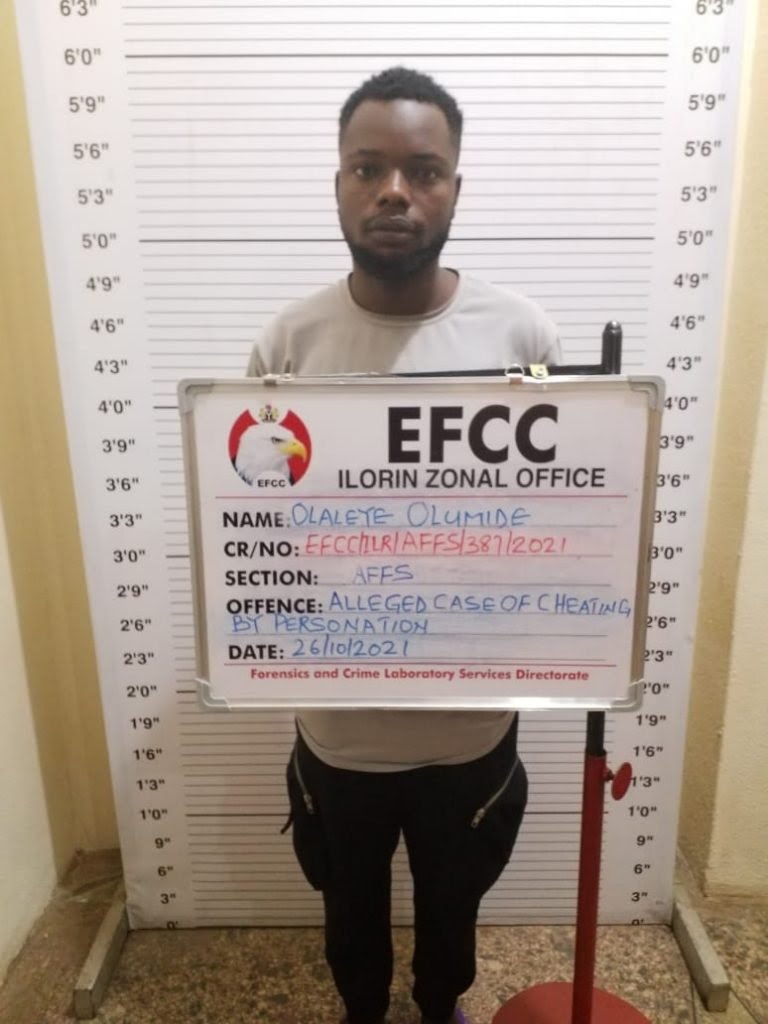 Olaleye, who pleaded guilty to the two count charge preferred against him by the Ilorin Zonal command of the Economic and Financial Crimes Commission, EFCC, was sentenced by Justice Muhammed Sani to 18 months jail term.

Olaleye was one of the suspects arrested at Ogbomosho, Oyo State, on October 26, 2021 following actionable intelligence about activities of persons suspected to be fraudsters by the Ilorin Zonal Command of the Economic and Financial Crimes Commission, EFCC.

Count two of the charge sheet against him reads; “That you, Olaleye Olumide Paul, sometime in March 2019 at Ogbomosho within the jurisdiction of the Federal High Court fraudulently impersonated one Roven Riley via Gmail account beautifullina@gmail.com with intention to obtain $154.82 US dollars and thereby committed an offence contrary to section 22(3) (b) of the Cybercrime (Prohibition Prevention) Act, 2015 and punishable under section 22(3)(d) of the same Act.’’

Following his plea, counsel to the EFCC, Sesan Ola, reviewed the facts of the case and tendered the extra-judicial statements of the defendants and iphone 6 recovered from him at the point of arrest, and were admitted in evidence.

Ola, thereafter urged the court to consider the plea of the defendant and exhibits tendered to hold that the prosecution had established a prima-facie case against the defendant.

Delivering judgment, Justice Sani found the defendant guilty of the three counts preferred against him.

The trial judge sentenced him to six months imprisonment on each count, to run concurrently with option of fine of N100,000 on each count.

The court also ordered the forfeiture of the iPhone 6 recovered from the convict at the point of arrest to the Federal Government. He is to restitute $504 dollars to the victims.

Wanted Abba Kyari, Four Others Now In Our Custody – NDLEA