Lagos Fire: Sanwo-Olu Insists On Eviction of Traders At Apongbon 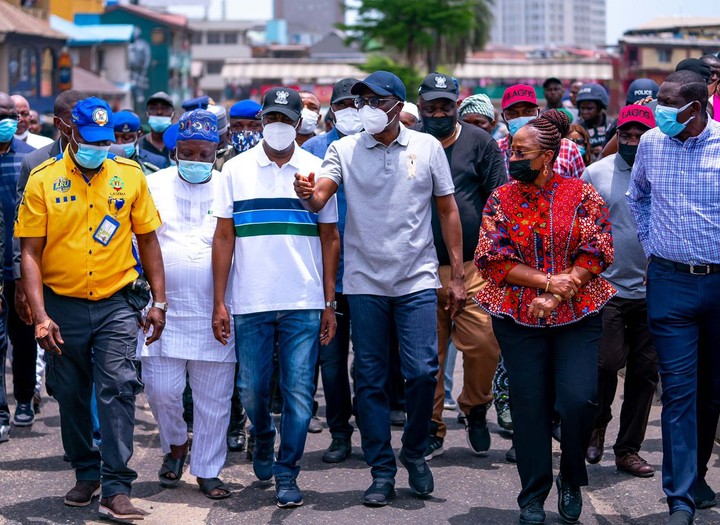 Lagos State Government has insisted that all occupants of spaces under the Apongbon axis of the Eko Bridge must vacate by tomorrow.

Governor Babajide Sanwo-Olu stated this during a visit to the scene of the fire incident where he met with market stakeholders, yesterday.

The governor, who addressed aggrieved traders at Apongbon said it was high time the state government started taking care of its infrastructures noting that the level of destruction of the bridge was huge.

“What has happened is that we have all gone round and seen the level of destruction which is extremely unfortunate and a clear testimony of how public assets should not be turned into. We have given a seven-day notice to all of the illegal occupants under the bridge and I want to reiterate that this will still go on and this Wednesday is the deadline for everybody that has anything to leave there as we want to start extensive clearing of the place. After that, we will get all the structural engineers and all companies involved in the construction of the bridge. This bridge was built by Julius Berger in 1974 and thankfully, they are still existing and so it is only after we have cleared the place, then we can invite them to do a thorough assessment.”

The governor said the processes involved in rehabilitating the bridge cannot be speculated but government was in extensive discussions with the Federal Ministry of Works to ensure normalcy is restored.

On how the traders would feel is government goes ahead with the eviction order, Sanwo Olu said: “I will work with the Special Advisers, Local government chairman to see how we can bring forward representatives of the traders and identify where and how we can relocate them to ensure that they can continue with their source of livelihood, but to go back to how it is being done, it will mean that we are reckless on our part. It is about time we take care of our infrastructures and I will be reaching out to other trading parts in Lagos too”

However, some aggrieved traders under the aegis of the Aromoleti Esho market Association, Apongbon/Ebuta Ero axis pleaded with government not to evict them as families who depend on running their businesses in the axis would die of starvation.