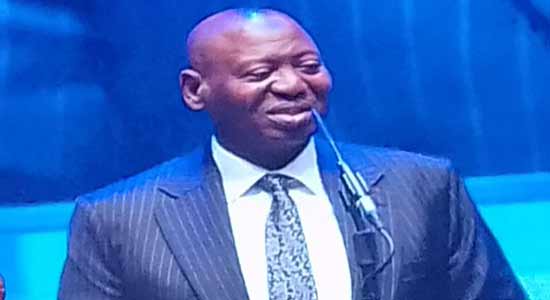 Justice Kazeem Alogba, the Chief Judge of Lagos State and the Chairman of the Judicial Service Commission, has advised the recently appointed presidents of Customary Courts to be cautious in the administration of justice.

According to Alogba, in order to save money for the taxpayers, the new presidents must under no circumstances go above their powers.

He said, “You must understand the culture and the practices of the people you are serving. You are meant to apply the laws without technicalities because you are closer to the grassroots. Be very careful in passing your judgment.”

The Lagos State Attorney General and Commissioner for Justice, Moyosore Onigbanjo SAN, in his remark, admonished the participants to give the training the seriousness it deserved.

He said, “This is a very important step to enable you and to equip you to function efficiently in the new roles that you have been sworn into and you are blessed to have a very rich faculty to give you the rudiments of what being a judicial officer is. They are going to take you through the basics so that you know what to do in terms of comportment, keeping calm when you are under pressure, and when undue induced influence comes your way.

“This is a section you can not do away with; it is necessary and essential and I urge you all to give it your undivided attention because this can make or mar your tenure on the customary bench.”

The state Head of Service, Mr Hakeem Muri-Okunola,  also urged the Customary Court presidents and members to show integrity and be honest in delivering the task they had been appointed to discharge.

He said, “To encourage you in the task that you all are out to commence, capacity building and capacity development are the mantras of our justice system. The executive arm of the government is happy to support the judicial arm of government to support you in the discharge of your functions.”