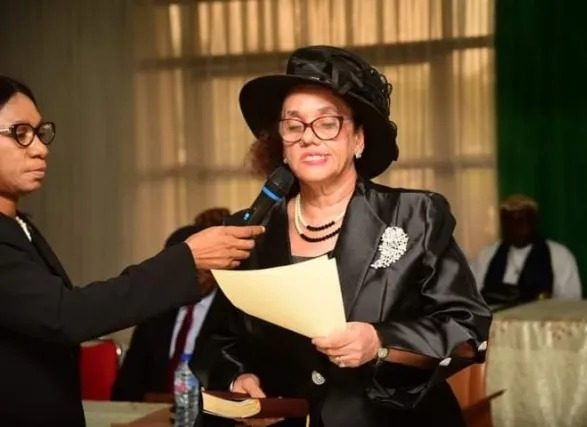 Dr. Okezie Ikpeazu, the governor of Abia State, has sworn in Justice Lilian Abai as the state’s acting chief judge and charged her on upholding the state’s friendly relationship between the executive and judicial arms.

Speaking after administering the oaths of office and allegiance on the Acting Chief Judge, by the State Solicitor General, Lady Uzoamaka Ikonne, at the Government House, Umuahia, Ikpeazu assured that his administration would do everything to support the Acting Chief Judge to make the Judiciary better.

“The executive and judiciary arms of government maintain cordial relationship. It is desire and wish that the tenure of the Acting Chief will follow the same trajectory,” the Governor said.

He applauded the judiciary for creating and maintaining a succession plan that facilitates smooth transitions in leadership.

The Governor praised the good working relationship between the Executive and Judicial branches of government in the State and praised Justice Onuoha Arisa Kalu Ogwe, the State’s former Chief Judge, for collaborating with the Executive.

Ikpeazu expressed confidence that Justice Lilian Abai would perform admirably in her new role as Acting Chief Judge and congratulated her on her appointment.

Acting Chief Judge Justice Lilian Abai thanked the Governor for the honor bestowed upon her in her acceptance speech, and she pledged to carry out her duties successfully while upholding the friendly relationship between the Executive and the Judiciary.

Senior Magistrate, Lawyer, Others Kidnapped By Gunmen In Enugu