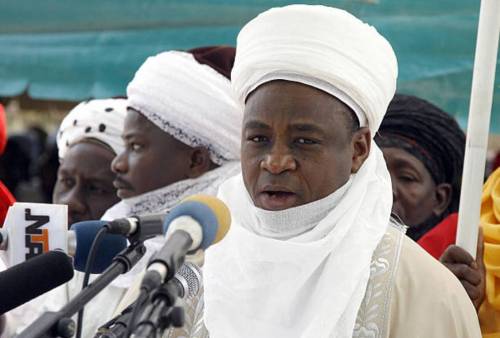 A group called JNI, which is the umbrella body of northern Muslims, is headed by Sa’ad Abubakar III, the Sultan of Sokoto.

According to the group, the essence of government and governance is solely to protect the five principal cardinal rights of the human race, the most important of which is life.

The religious body was reacting to the killings and terrorist attacks under the Muhammadu Buhari-led government, particularly the recent attack on the Abuja-Kaduna train.

JNI in a statement signed by its Secretary-General, Dr. Khalid Aliyu said terrorists in the country were becoming bolder and more belligerent by the day, adding that they now operated as they wished.

The statement read, “The well-orchestrated incident remains highly condemnable, reprehensible and upsetting to every rational mind. Any government that is incapable of protecting the lives of its citizens has lost the moral justification of being there in the first place; this is enunciated in section 33(1) of the Constitution of the Federal Republic of Nigeria.

“It appears that the continuous callous acts of mayhem, killings and arson happening almost on daily or weekly bases around us; either within communities and/or on the roads we ply, has automatically reset our human psyche that we now have accepted such dastardly acts as part of our lives, to the extent that we no longer feel it.

“The humanity in us is slowly being eroded thereby making us adapt to the new normal within which we unfortunately found ourselves. In Islam and by all global standards, the essence of government and governance is solely to protect the five principal cardinal rights of the human race, the most important of which is life.

“Terrorists are now becoming bolder and more belligerent by the day. They operate in any area of their choice(s) at any time they so wish. They even operate for up to 8 hours non-stop (as it was reported to have happened in Niger state last Monday), without any fear of being confronted or apprehended.

“Most communities are now under the bandits’ absolute control with taxes being paid to bandits–some parts of Borno, Katsina, Zamfara, Niger, Sokoto states and some others yet to be disclosed to the public.

“In fact, terrorists do what they wish knowing that there is no gun power or authority that will defy them. With all the reported resources allocated to relevant security agencies; intelligent gathering mechanism, military arsenal and tact, can’t the government provide any convincing justification on why the security situation in the country continues to deteriorate?

“Why are attacks experienced all over the place and continuing unabated without any deterrence?”

The group added that as part of efforts to tackle insecurity in Nigeria, the war on illicit drugs should be placed on the front burner “as it is the elixir that spurs criminals to action.”

Senate Extends 2021 Budget Implementation To May 31