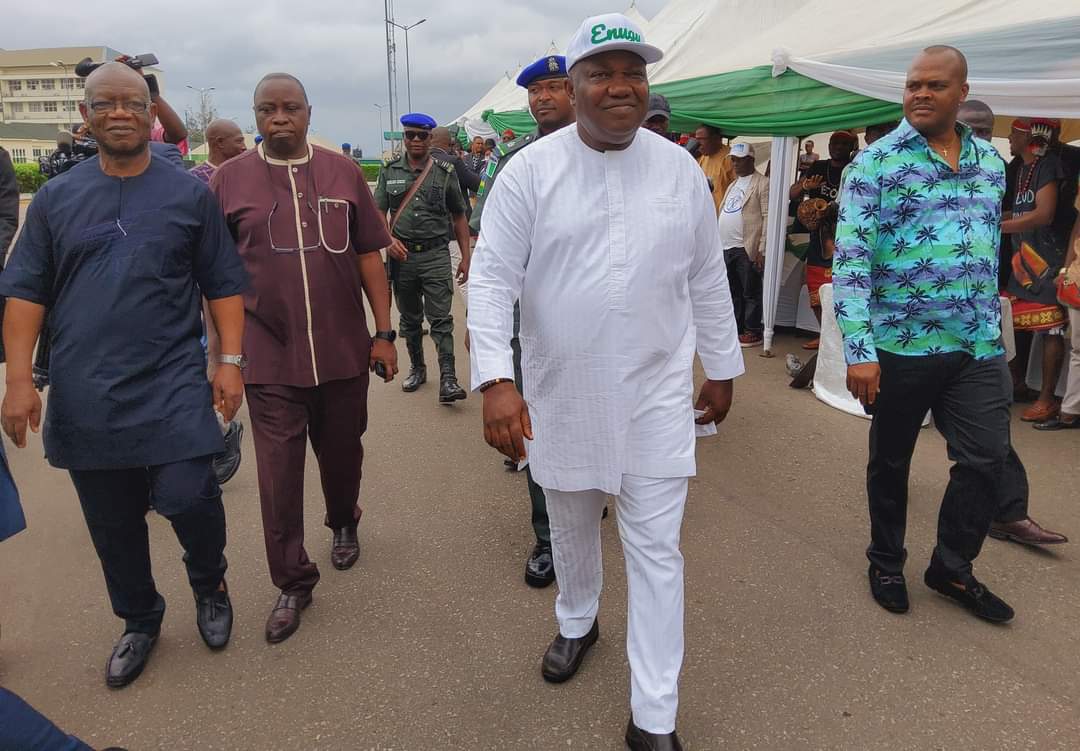 Governor Ifeanyi Ugwuanyi of Enugu State has called for proper justice to be served in Ishi-Ozalla Autonomous Community, Nkanu West Local Government Area, over the Igweship tussle in the community.

Gov. Ugwuanyi who gave the directive when the people of Ishi-Ozalla visited him at the Government House, Enugu, to lay complaints over “the inhuman, very pathetic, and unjust treatment” being meted out to them by a politician from the community and his cohorts, told them that his administration will observe all the processes required to address the injustice.

The governor assured the people of Ishi-Ozalla that the story will change next time they will visit the Government House.

Insisting that justice must be done, Gov. Ugwuanyi urged them to “embrace peace, love one another and show love to all,” in keeping with his administration’s peace and grassroots development initiatives.

Laying their complaints to Gov. Ugwuanyi, Chief Mrs. Muna Nweke accused a politician from Ishi-Ozalla of being behind all the crises in the community, saying that the person in question “imposed an Igwe on us while the people of the community have unanimously elected an Igwe, our illustrious son, Don Sylvester Nweke.”

Chief Nweke told the governor that the accused person and his political cabals deployed name-dropping tactics in an attempt to intimidate the people of Ishi-Ozalla and impose an unpopular candidate on them as their traditional ruler.

“Your Excellency, you could recall also that we issued a press release that we are not part of it (imposition) and you asked us to go and make peace,” she said.

Stressing that the said politician “is destroying our community”, Chief Nweke added: “The man he is imposing on us is not our king and he cannot rule us. We have elected our son (Sylvester Nweke) to rule us. Our son will rule Ishi-Ozalla.

“Umuedeaniagu is the ancient people of Ozalla that migrated from Okpatu in Ozalla. Your Excellency, look into our land case and confirm if a visitor has land. Nobody has the kind of land we have in Ishi-Ozalla. The land that was donated to UNTH, 60 percent of it belongs to my ancestors.

“How can somebody tell me that I cannot be part of the leadership of the community? I hold the title of Ufam Ozalla; it is the stream that unites the whole of Ozalla.

“I am the re-incarnate of that goddess and I have come for peace to reign in my family,” Okoye said.