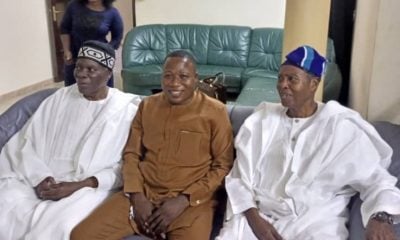 Sunday Igboho’s counsel, Chief Yomi Aliyyu (SAN), said on Monday that his client would stay in Cotonou till further notice.

Aliyyu said Igboho was released to his medical doctors with the agreement that he would not leave Cotonou for any reason.

He said, “I am to inform you that Chief Sunday Adeyemo, aka Igboho Oosa, has been released from prison to his medical practitioners under the agreement that he should not leave the medical centre or Cotonou for any reason.

“Praises should be given to two prominent Yoruba personalities to wit; Prof Wole Soyinka and Prof (Banji) Akintoye, for this turnaround in our client’s matter.”

However, the 49-year-old activist might not return to Nigeria till May 2023 after the expiration of the regime of the President, Major General Muhammadu Buhari (retd.).

He was freed on medical grounds after months of diplomatic meetings with the government of President Patrice Talon by Yoruba monarchs and others at home and in the Diaspora.

In a statement on Monday by Akintoye’s spokesman, Maxwell Adeleye, said Igboho was released by the Benin Republic government on Monday and handed over to the emeritus professor and his deputy, Wale Adeniran.

Akintoye, who had earlier said he relocated to Benin Republic to secure Igboho’s freedom, described the release of the activist as a triumph of truth over darkness in Yorubaland.

It read in part, “The Yoruba Nation activist, Chief Sunday Adeyemo, fondly called Sunday Ighoho, has been released by the Government of Republic of Benin.

“In a statement by the Communications Secretary of Ilana Omo Oodua Worldwide, Mr Maxwell Adeleye, Akintoye described the release of Ighoho as a triumph of truth over darkness in Yorubaland.”

Adeleye, however, said Igboho would remain in Cotonou till further notice.

When asked if Igboho would continue his trip to Germany, Adeleye stated, “He (Igboho) is remaining in Cotonou. He was freed on medical grounds as no case was preferred against him. Asides, he had been detained for more than six months, which is contrary to the law.”