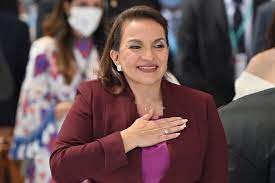 Xiomara Castro has been sworn in as Honduras’ first female president, amid a political crisis that threatens her plans for the impoverished nation.

Speaking at the ceremony, the leftist leader said she was taking the lead of a “broken” country – but vowed to pursue social justice and transparency.

But her agenda has been undermined by a feud in her Libre (Free) Party.

Ms Castro’s husband, Manuel Zelaya, ruled the country from 2006 until 2009, when he was ousted by a coup. She ran for office twice in the years following his removal from power, before her victory in the election last November.

Since then, Ms Castro has enjoyed a wave of positivity among the public. Her arrival marks the end to the 12-year reign of the right-wing National Party, which has been plagued by scandals and corruption accusations.

Thousands of people joined the inauguration ceremony at the national stadium in the capital, Tegucigalpa.

“The economic catastrophe that I’m inheriting is unparalleled in the history of our country,” she said in her speech, highlighting the need to restructure the national debt.

But she promised: “My government will not continue the maelstrom of looting that has condemned generations of young people to pay the debt they incurred behind their back.”

US Vice-President Kamala Harris was among the foreign officials who attended the inauguration – receiving a huge wave of applause from the gathered crowd.

Insecurity: Nigeria Shall Win The Battle Over Evil – Buhari