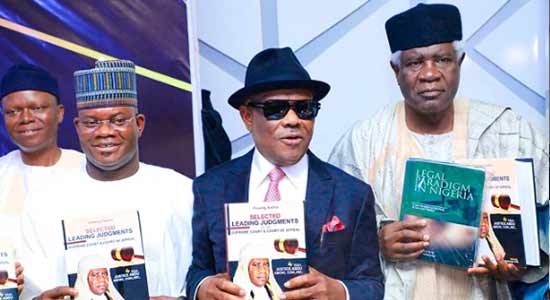 Nyesom Wike, the governor of Rivers State, has urged judges to fulfill their judicial oaths in the execution of their duties, claiming that certain judges’ lack of bravery and character is to responsible for their inefficient judicial performance.

The Governor premised his request on the nation’s ongoing political unrest, which has placed democracy and the rule of law constantly at danger.

On Friday, Wike delivered the keynote address at the book launch for “Legal Paradigm in Nigeria: A New Direction in the Study of Law and Practise,” which was published in Abuja in memory of retired Supreme Court Justice, Hon. Justice Abdul Aboki.

He emphasized that a robust legal system is necessary for the country and its democracy to thrive.

“The judiciary dies where it lies comatose and removed from the aspirations of the citizens for good governance, the rule of law, the protection of fundamental rights and the guarantee of free and fair elections.

“The judiciary dies when it can easily be manipulated; when justice can be procured; when the injustice is rendered in place of justice to the aggrieved parties; or when resort to self-help and other means of redress outside the law becomes the preferred norm by citizens.”

“Nevertheless, this is possible only when the judiciary is able to assert itself without fear or favour, upholding the truth at all times and standing up to any other power or principality that attempts to undermine or override its constitutional responsibilities, powers and processes.

“Justice could be delayed, which is not acceptable, but it must never be refused or denied for the judiciary to serve as an effective watchdog of our democracy and thwart the evil intentions of the enemies of the people”, Wike charged.

“Let us, therefore, continue to call on the Federal Government to strengthen our judiciary system by resolving the challenges militating against judicial effectiveness as I have done in Rivers State where we have continued to prioritize the independence of the judiciary and improved the working and living conditions of our judges beyond measure”, Wike called.

He also accused political parties and party leaders of exhibiting utter arrogance and disdain for the electoral laws and the democratic process in their actions and conduct.

He warned that Nigerians are becoming more and more apprehensive about the success of the forthcoming general elections, and the survival of the country’s democracy beyond 2023.

He said; “The Federal Government continues to undermine the rule of law, while political parties and party leaders continue to exhibit utter arrogance and disdain for the electoral laws and the democratic process in their actions and conduct.

“With cries of injustices, discrimination and inequities everywhere and with the rising instability and deterioration of law and order, only the undiscerning would believe that Nigeria is not headed for the hard rocks.”

The governor expressed his appreciation to Hon. Justice Aboki for his successful career, endless hours of service, and contributions to the advancement of the legal profession, democracy, the rule of law, and the nation.

He described Hon. Justice Aboki, as a consummate jurist who has left his name indelibly etched in the sands of time and judicial history.

“While judges are of different social, economic and political persuasions, Hon. Justice Aboki prides himself among the progressive rank that stands up for what is right and just and believes that the law and the constitution as interpreted and enforced by the courts must both protect and advance the unity and well-being of the nation and its people.

Governor Wike appreciated individuals who took the effort to diligently put the book together. He asserts that the book will serve as a valuable reference point for understanding Hon. Justice Aboki’s approach to and ideas of law, society, judgment, and justice, among other things, as well as his life, career, and philosophical undercurrents.

Yahaya Bello, the governor of Kogi State, praised Justice Aboki for his distinguished contribution to the country on behalf of all Kogis.

Governor Wike was praised for his persistence and capacity for speaking truth to power.