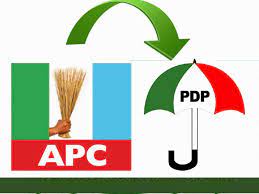 The suspended Chairman of Kano State Public Complain and Anti-Corruption Commission, Barrister Muhyi Rimin-Gado, has defected to the People Democratic Party ahead of the 2023 general elections.

Rimin-Gado told Kano Focus, an online newspaper that he has submitted online application to join PDP while he is expected to formally register at his ward in Rimingado Local Government Area in February.

Since his suspension by Kano State government on July 5 2021, posters of the former chairman have flooded the streets of Kano indicating his interest to contest the governorship election next year.

While some posters are without a political party or a logo, others bear the symbol of APC.

However, Magaji had shunned activities of APC either at local government or state level and was never identified with any of the warring factions of the ruling party.

Recall that earlier in December 2021, Police foiled an attempt by Rimin-Gado to address thousands of youth in Kano in commemoration of International Anti-corruption day celebrations where they locked the venue.

However, speaking recently on why he joined PDP, Rimingado said he joined PDP because it is the only viable alternative that can salvage Kano State from the current political mess.

Rimin-Gado added that PDP as a repositioned party will cleanse the political mess in Kano come 2023.

“I have studied the current political situation in Kano and discovered that with the ongoing internal political crisis in both Ganduje and Shekarau’s camps of the All Progressives Congress, PDP is the only alternative party that can save the situation.

“The issue of who will be the next governor of the state, or who will be Senators in all the three senatorial districts does not matter, all we are after now is to salvage Kano from the current political mess. Politics is not a do or die affair.

“I joined PDP in order to serve my people and the state. I have done under the APC-led government and I am ready to do more under any political party,” he said.

2023: APC To Decide Zoning Of Offices This Week