FEDERAL HIGH COURT OF LAGOS AFFIRMS THE NOMINATION OF HON. EBENIZER KEN OBIOMA AS THE AUTHENTIC AND VALID CANDIDATE OF PDP FOR OSHODI/ISOLO II FEDERAL CONSTITUENCY IN LAGOS STATE 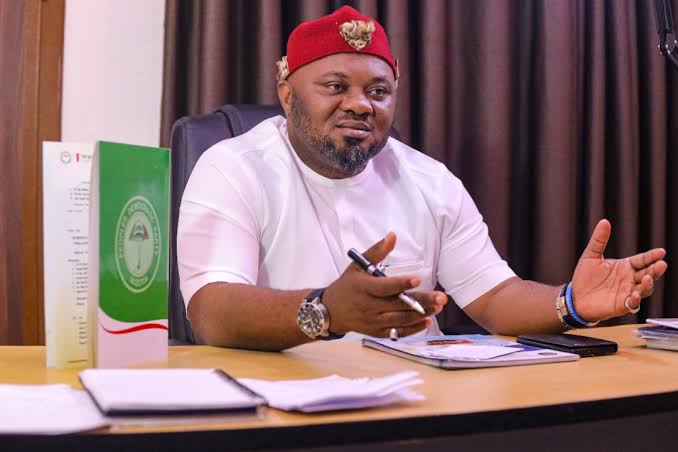 The Federal High Court Lagos (coram: Justice Oweibo) has affirmed the nomination of Hon. Ebenizer Ken Obioma as the validly elected candidate of the Peoples Democratic Party (PDP) for Oshodi/Isolo II Federal Constituency in Lagos State. The Court in its judgment dismissed the Suit filed by Mr Adeoye Adelaja who claimed to have won the election.

Mr Adelaja filed the Suit No. FHC/L/ 1227/2022 seeking amongst other reliefs a declaration that the PDP is obliged to apply and comply with the provision of section 84(5)(C)(ii) of the Electoral Act, 2022 for the primary in the selection or nomination of candidate for the Oshodi/Isolo 2 Federal Constituency in 2023 general election.

Premised on the declaratory relief, the Plaintiff sought for an order mandating PDP to forward his name as validly nominated candidate for 2023 general election and an order nullifying the forwarding of the name of Hon.Ebenizer Ken Obioma or any other person as the PDP Candidate. The Plaintiff equally sought for alternative reliefs nullifying the nomination of Hon. Obioma and an Order mandating PDP to refund the Plaintiff the sum of N20 Million being the cost of Nomination and Expression of Interest Form paid by the Plaintiff.

The PDP and the 3rd Defendant, Hon. Obioma vehemetly opposed the Suit and indeed filed robust Defence processes. Hon. Obioma Ken Ebenizer through his lawyer, Mr Prince I. Nwafuru, a Partner at The Law Suite had argued that the Plaintiff failed in all respects to prove his case. Mr Nwafuru in his arguments at the hearing demonstrated that the case of the Plaintiff was built on nothing as he failed to exhibit the result of the purported Primary held on 06 June 2022 which he claimed to have won. In his written and oral arguments, Mr Nwafuru argued on behalf of Hon. Obioma that:

(a) The 3rd Defendant (Hon. Obioma) was and remains the winner of the Primary election held on 22 May 2022 having scored the highest votes cast at the election as shown by the valid result sheet exhibited by the 3rd Defendant in his Counter Affidavit to the Originating Summons

(b) The decision of PDP to conduct repeat Primaries on 06 June 2022 across Lagos State was because of the issues that arose from the Primaries held in other Constituencies outside Oshodi/Isolo 2 Federal Constituency. The Primary held in Oshodi/Isolo 2 Federal Constituency on 22 May 2022 was and remains valid and the 3rd Defendant emerged the winner of that Election. This was further confirmed by the PDP National Working Committee (NWC) and NEC.

(C) The repeat Primary of 06 June 2022 which the Plaintiff premised its purported victory on, was inconclusive as shown by the INEC’s report that was exhibited by the Plaintiff and the Defendants. The INEC Report revealed that the Primary of 06 June 2022 was not monitored by INEC because of violence that characterised the whole exercise. INEC in the said report concluded that the Primary was inconclusive. It was shown that in the absence of any conclusive Primary and valid result, the case of the Plaintiff collapsed like a house of cards. The inconclusiveness of the 06 June 2022 Primary prompted the NWC and NEC of PDP to hold an emergency meeting where it resolved to agreed to rely on the Primary held on 22 May 2022 which was adjudged free and fair.

(c) The score sheet relied on by the Plaintiff was fake and fictitious as it did not conform with the format of the result as stipulated under the PDP Guidelines and Constitution.

(c) The failure to produce the result sheet of the Primary Election which he claimed to have won is not only fatal to the Plaintiff’s case but goes to show that either the Plaintiff does not have any result at all or that if he has a result which is adverse to his case.

In a well considered judgment, the Court dismissed the case of the Plaintiff and held that he was unable to present the result of the election which he purportedly won – a fundamental defect and lacuna in his case as one cannot place something on nothing and expects it to stand. The Court noted that the 3rd Defendant, Hon. Obioma not only tendered a valid result sheet he went further to exhibit other documents to show that he won the valid Primary held on 22 May 2022 and that his name was validly submitted to INEC as the authentic Candidate of PDP for Oshodi/Isolo 2 Federal Constituency. The Court in agreeing with the lawyers to PDP and the 3rd Defendant also refused the alternative reliefs seeking to recover the sum of N20 Million paid by the Plaintiff for the purchase of Nomination and Expression of Interest Forms.

The Court had on the same day earlier dismissed a related Suit (Suit No. FHC/L/CS/1006/2022) filed by one Mr. Adewunmi Alade Benjamin against PDP, INEC and Hon. Ken Obioma Ebenizer challenging the same Primary. Mr Benjamin in his own case had claimed that he won both the Primaries held on 22 May 2022 and 06 June 2022. The 3rd Defendant was represented by Chief Wakeel Olawale Liady of The Bridge Chambers. Similar arguments were also advanced in this case.