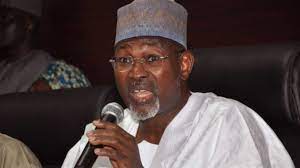 He said this on Sunday at the citizens’ townhall on Electoral Bill 2021 organised by Yiaga Africa and partners, Jega said the National Assembly should do the needful instead of overriding the President.

“With the way the provisions of the bill stands, the National Assembly should do the needful rather than contemplating overriding the President by removing the contentious provisions,” Jega said.

He said that the Electoral Act bill contains quite a lot of good things that can enhance electoral integrity.

He said what is key is to give INEC the law to improve ahead the 2023 General Elections and also off cycle elections before the 2023 polls.

He said, “The challenge is what the National Assembly introduced in the Electoral Bill which is without serious contemplation.

“It is very important that we have a lot of legal frame work. I think clearly the electoral process would have better integrity if we do direct primaries appropriately.

He also said that INEC made 31 recommendations to the amendment of the 2010 Electoral Act to conduct credible elections, but National Assembly only approved 25 of the recommendations.