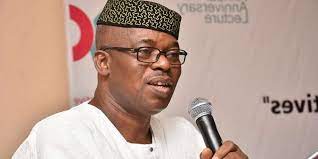 Former governor of Ekiti State and one of the governorship aspirants in the Peoples Democratic Party (PDP), Mr. Segun Oni, has dumped the party for the All Progressives Grand Alliance (APGA).

Oni who lost out in the recently conducted PDP Governorship Primary election to the winner, Bisi Kolawole, was said to have reached out to APGA for an opportunity to contest the governorship election using their platform.

The meeting which was held behind closed doors had the national chairman of APGA, Chief Victor Ike Oye and National Secretary of the party and former Minister of Information, Mr. Labaran Maku in attendance.

It was gathered from a source privy to discussions at the meeting that the team came to APGA at the instance of the ex-governor who has concluded arrangements to dump the PDP for APGA.

According to the source, “Oni has already registered with APGA and purchased its nomination form, having secured firm assurances that he will be substituted as the party’s flag-bearer for the Ekiti State Governorship election.”

As part of the plan to unveil his new platform, the source said that Oni is mobilising supporters who will accompany him on a long road march from Ikare Ekiti to the state capital, Ado Ekiti.

The road march which is meant to showcase the strength of his support base will have the supporters drumming, dancing and waving the APGA flag all throughout the march.

World Cup: If Nigeria Fails To Qualify I Won’t Watch It – Dangote