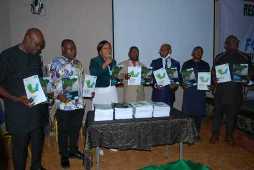 The Zonal Head of Public Affairs of the Port Harcourt Zonal Command of the Economic and Financial Crimes Commission, EFCC, Assistant Commander of the EFCC, ACE Dele Oyewale has called on civil society and communal groups in the Niger Delta region, to brace up and tackle the menace of economic and financial crimes at the grassroots level, to ensure the repositioning of the Niger Delta Development Commission, NDDC.

He gave the charge on Thursday, February 24, 2022 in Port Harcourt, Rivers State at a Regional Conference on ” Repositioning The NDDC For Inclusive & Effective Service Delivery” convened by the Social Action. According to him, grassroots involvement and engagement by civil society groups, are effective means of uncovering and reporting project compromises by the NDDC.

” The EFCC has been consistently harping on the need for public ownership of the anti- corruption war. As civil society groups, the task of uncovering and reporting project abandonment, compromises and other corrupt practices by actors in the NDDC, can only be effective if more engagements are done at the grassroots level.

Abandoned projects are not on the space, they are on planet earth and if interactions are done with those at the grassroots, more useful facts would be gathered that will assist the EFCC in bringing suspected culprits to justice”, he said.

Oyewale, who spoke for the Port Harcourt Zonal Commander of the EFCC, ACE Nwanneka Nwokike, stressed the need for the public to make more functional use of the Eagle Eye App launched by the EFCC for the reporting of corruption cases.

” Let me remind this gathering of the Eagle Eye App launched by the EFCC for the reporting of corruption cases. It is a digital means of sending suspected images of corrupt practices and information to the EFCC anonymously. There is no excuse again for not reporting issues of economic and financial crimes in our environments.

The Niger Delta region would be better served if individuals, communal groups and civil society organisations make optimal use of this app”, he said.

Ekere Usiere, Resident Anti- Corruption Commissioner of the Independent Corrupt Practices and Other Related Offences Commission, ICPC, for Rivers and Bayelsa States, said that the NDDC could only be repositioned if the existing systems and processes being used in NDDC are reviewed for more accountable and transparent functioning.

” The ICPC would like to conduct systems study and review of all processes in the NDDC. Through this effort, adjustments, improvements and better developments of the systems would be achieved and greater transparency enshrined in the system”, she said. She also assured that her Commission would do more project tracking in the Niger Delta region.

Other speakers at the Conference are: Director, Bureau of Public Procurement, represented by Mr. Adebowale Adedokun, Director of Advocacy of Social Action, Vivian Bellonwu and a public affairs analyst, Dr. Osasu Isibor Ekpen.