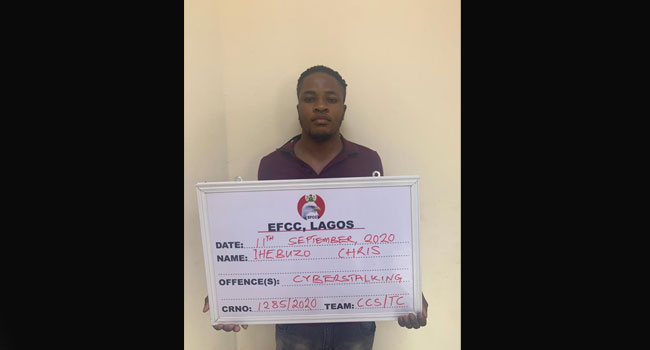 Ihebuzo, known as the “Access Bank hacker”, following his viral video in which he bragged of gaining access into the bank’s database and extracting data of over 2,000 customers, including their Bank Verification Numbers, BVNs, was arrested by operatives of the Economic and Financial Crimes Commission, EFCC sometime in September 2020.

The bank had petitioned the EFCC and following the conclusion of investigations, seven counts were drafted against him to which he pleaded “not guilty”.

One of the counts read: “Chris Ihebuzo, sometime in August 2020 in Lagos within the jurisdiction of this Honourable Court, with intent to defraud had in your possession Access Bank Public Liability Company’s document, containing the phone numbers, bank account numbers and biometrics verification numbers of Access Bank customers.”

Another count read: “Chris Ihebuzo, sometime in August 2020 in Lagos within the jurisdiction of this Honourable Court, with intent to extort money from Access Bank Plc knowingly sent an electronic mail to the management of Access Bank Plc demanding money from them.”

At the resumed sitting on February 4, 2022, an operative of the EFCC, Omotosho Adewunmi, testifying as the second prosecution witness, narrated how the defendant was arrested following the action on the petition from the bank.

Led in evidence by the prosecuting counsel, Franklin Ofoma, she further told the court that several documents were recovered from him as well as an HP laptop, chips, and discs.

The case has been adjourned till February 18 and March 11, 2022, for continuation of trial.