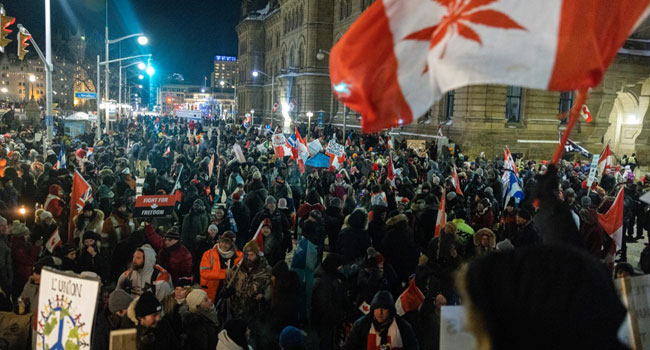 A week-long occupation of Canada’s capital by truckers opposed to vaccine mandates was set to ramp up Saturday with thousands of demonstrators expected to pile into Ottawa while other cities also braced for protests.

Police said they were expecting up to 2,000 protesters as well as 1,000 counter-protesters to join the hundreds already parked in front of parliament, but organizers said tens of thousands were headed to Ottawa.

Following thousands of complaints from local residents of threats and harassment by protesters who have made even sleep difficult with incessant honking, and an online petition signed by 40,000 demanding action, Sloly vowed to crack down on what he called an “unlawful” protest.

But he did not offer a timeline.

Reached for comment by AFP, protest coordinator Jim Torma said on behalf of organizers that the protesters would not back down.

“They’re not going to hide us,” Torma said. “We’re going to be in (politicians’) faces as long as it takes” to force an end to public health restrictions aimed at slowing the spread of Covid-19.

– Trump backs ‘Freedom Convoy’ –
The so-called Freedom Convoy started on Canada’s Pacific coast in late January and picked up supporters along its 4,400-kilometer (2,700 miles) trek to the capital, as well as more than 10 million Canadian dollars ($8 million) in online donations.

However, the online fundraising platform GoFundMe said Friday that it had removed the Freedom Convoy fundraiser from its site after receiving evidence from law enforcement that the demonstration “has become an occupation, with police reports of violence and other unlawful activity.”

The number of protesters in Ottawa had peaked at several thousand last Saturday, according to officials, before dwindling to a few hundred by midweek.

Donald Trump Jr. and Elon Musk have both tweeted support for the truckers.

On Friday, former US President Donald Trump encouraged them too, saying in a statement that the “harsh policies of far left lunatic Justin Trudeau… has destroyed Canada with insane Covid mandates.”

Prime Minister Justin Trudeau, who is isolating after contracting Covid, has refused to meet with the truckers, as others stepped up criticisms of the protesters, accusing them of racism and even terrorism — labels organizers reject.

This weekend, bridges and roadways into Ottawa will be blocked, with protesters asked to park in lots on the outskirts and walk or use city transit to downtown.

In Toronto, Mayor John Tory said officials were doing “everything we can to avoid the situation that we’re seeing in Ottawa.”

Ontario Premier Doug Ford, meanwhile, urged the truckers in Ottawa to go home, echoing the protesters’ dislike of pandemic restrictions but insisting they are “necessary” to keep the population safe.

“It’s not a protest anymore,” he told a joint news conference with Canada’s 12 other provincial and territorial leaders. “It’s become an occupation that is not only hurting families, it’s hurting businesses.”

“There are many jurisdictions around the world that have adopted more common-sense travel protocols than we have now in place in Canada,” he lamented.

Requiring people to wear face masks for indoor activities such as shopping, vaccine mandates, and most other Covid measures are provincial responsibilities.

Saskatchewan province this week became the first jurisdiction in Canada to announce an imminent lifting of all those pandemic restrictions — despite pushback from doctors.