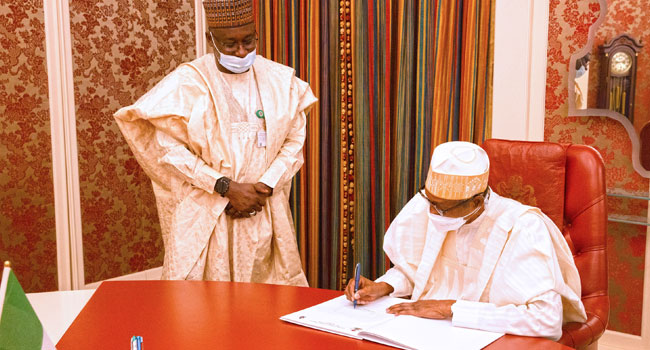 President Muhammadu Buhari on Tuesday signed an agreement to end open defecation in the country by 2025.

In renewing Nigeria’s commitment to ending the scourge, the President signed a pledge card on Tuesday in his office, in the presence of the Minister of Water Resources, Engineer Suleiman Adamu.

Buhari had on November 20, 2019 signed an Executive Order 009 entitled, ‘The Open Defecation-Free Nigeria by 2025 and Other Related Matters Order’ to eliminate the practice of open defecation.

The reason for signing the agreement is to end open defecation is in line with Nigeria’s commitment to the United Nations Sustainable Development Goals (SDGs).

Nigeria is ranked second among nations in the world with the highest number of people practicing open defecation, with those involved estimated at over 46 million.

The President described the statistics as disturbing and declared a commitment to implement the National Water Supply, Sanitation and Hygiene (WASH) Action Plan.

He also declared a State of Emergency on Nigeria’s water supply, sanitation, and hygiene sector.

The Executive Order became effective in 2019.