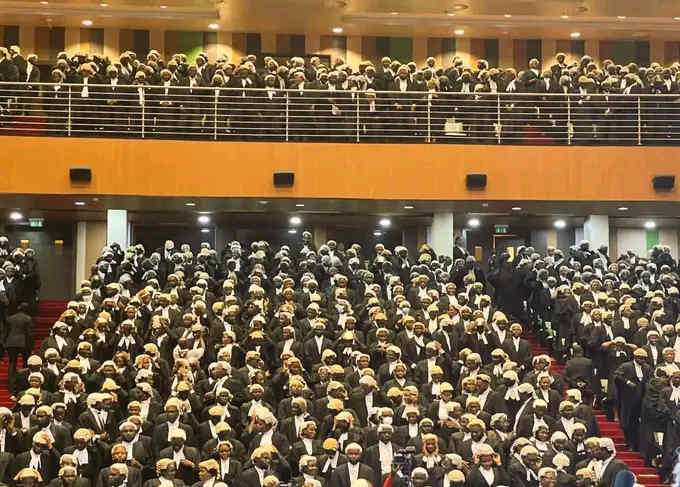 The Chairman of the Body of Benchers (BoB), Chief Wole Olanipekun (SAN), on Tuesday in Abuja, advised the newly called to bar lawyers to desist from envy, strife, blackmail, mudslinging, campaign of calumny, treachery or any attempt to run or pull anyone down.

He said: “Do not engage in strife, blackmail, mudslinging, campaign of calumny, treachery or any attempt to run or pull anyone down. Flee from envy like plague, for envy breeds hatred and unjustified contempt for others. Appreciate your colleagues and peers, as well as senior members of the profession who have received God’s benevolence, and pray that your own time will come”.

Chief Wole Olanipekun (SAN) had been the subject of controversy after the fallout between him and the Nigerian Bar Association (NBA).

Prior to the Call to Bar ceremony the NBA, had in a letter dated December 4, asked Olanipekun to step aside as Chairman of the BoB while the Vice Chairman, Retired Supreme Court Justice Mary Peter-Odili, takes over the proceedings at Tuesday’s Call-to-Bar ceremony in view of the alleged misconduct of a former partner of Wole Olanipekun and Co.

Chief Wole Olanipekun (SAN) noted that the Body of Benchers is not an appendage of the federal government, or any government, institution or agency howsoever which makes it an independent body.

“The term of office of the Chairman is only one year, from March of the preceding year to March of the following year, and the chairmanship of the body is rotated between the Bar and Bench, that is if a member of the bar is the chairman, the vice-chairmanship automatically devolves on the Bench,” he said.

“The Body of Benchers is not an appendage of the federal government, or any government, institution or agency, howsoever.

“It is an independent and autonomous body, and its meetings, affairs and decisions are not influenced by any power or authority whatsoever.”

In the concluded bar examination, a total of 4,711 graduated from the law school, 119 students graduated with First Class; 789 with Second Class Upper; 2,460, Second Class Lower; and 1,323 finished with Pass.