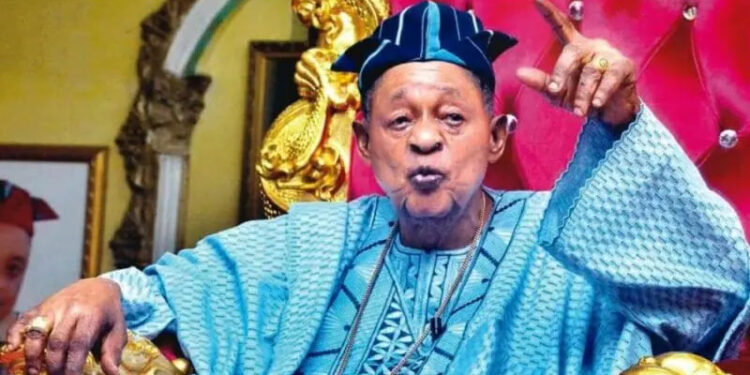 The Alaafin of Oyo, Oba Lamidi Olayiwola Adeyemi III, has joined his ancestors at the age of 82 after reigning as king for 52 years.

His words: “It is true. Alaafin has joined his ancestors. I saw his remains laid down in the palace. The palace is mourning now. I can confirm that to you. There are many people that have stormed the palace at Oke-Afin in Oyo town. I am there right now. I will give details later through a press statement.”

Asked about the press statement that was circulated this morning, debunking Alaafin’s death, Durojaiye responded: ” I did not issue any press statement today. That press release was issued a long time ago when it was rumoured that Alaafin was dead.”

On the burial of the monarch, Durojaiye, said the body of kingmakers, known as Oyemesi, would take decision on it.

Oba Adeyemi was said to have gone to the teaching hospital for routine medical check-up before death allegedly caught up with him at the facility.

The demise of Oba Adeyemi came 15 weeks after the demise of the 41st Olubadan of Ibadanland, Oba Saliu Adetunji, Aje Ogungunniso I, who has joined his ancestors on January 2, 2022. It also occurred barely five months after the transition of Soun of Ogbomosoland, Oba Jimoh Oyewumi Ajagungbade III, who also bade the world farewell on December 12, 2021.

Sources also said the remains of Oba Adeyemi III, were had been moved from Ado-Ekiti to Oyo town in the early hours of today April 23, for preparation for burial, as a traditional ruler and as a Muslim.

The Basorun of Oyo, who is the head of the kingmakers in the town, known as Oyomesi, Chief Yusuf Akinade Ayoola, according to the available information, is expected to take over the traditional rulership of the town, till the time that a substantive Alaafin would be appointed.

The monarch was born on October 15, 1938, into the Alowolodu Royal House, and as a member of the House of Oranmiyan to Raji Adeniran Adeyemi, who was born 1871, and later became Alaafin in 1945, and Ibironke of Epo-Gingin, who died when he was young.

His paternal grandfather, according to historians, was Alaafin Adeyemi I Alowolodu, who ruled during the Kiriji War, and was the last independent ruler of the Oyo Empire before British colonialism.

Alaafin, a lover of boxing, was a boxer before ascending the throne of his forefathers, succeeded Alaafin Gbadegesin Ladigbolu II in 1970, during the governorship of Colonel Robert Adeyinka Adebayo, on November 18, 1970.