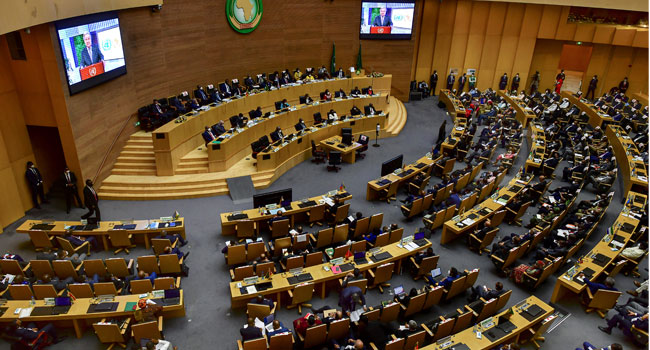 The African Union has condemned a recent “wave” of military coups that has seen an unprecedented number of member states suspended from the bloc, a senior official said Sunday, the last day of its annual summit.

The putsches were among the main issues expected to be discussed at the summit, along with the AU’s ties to Israel and its response to a grinding war in the north of host country Ethiopia.

Less than two weeks before the summit began Saturday, Burkina Faso became the fourth country to be suspended by the AU after disgruntled soldiers toppled President Roch Marc Christian Kabore.

“Every African leader in the assembly has condemned unequivocally… the wave of unconstitutional changes of government,” Bankole Adeoye, head of the AU’s Peace and Security Council, told a press conference Sunday.

“Do your research: At no time in the history of the African Union have we had four countries in one calendar year, in 12 months, been suspended,” Adeoye said.

Addressing African foreign ministers ahead of the summit, Moussa Faki Mahamat, chair of the African Union Commission, denounced a “worrying resurgence” of such military coups.

But the AU has been accused of an inconsistent response, notably by not suspending Chad after a military council took over following the death of longtime President Idriss Deby Itno on the battlefield last April.

And while Adeoye touted the AU’s use of suspensions to punish coup leaders, analysts say the body must be more proactive to prevent putsches.

“It is only when crisis hits that we say, ‘Gosh, how come this country is falling apart like this so quickly?’” Solomon Dersso, founder of the AU-focused Amani Africa think-tank, told AFP this week.

Faki’s move last July drew protest from influential members including South Africa and Algeria which argued that it flew in the face of AU statements supporting the Palestinian Territories.

Both countries pushed to have the issue put on the summit agenda.

As the summit opened Saturday, Faki defended Israel’s accreditation, saying it could be “an instrument in the service of peace” while calling for “a serene debate”.

He also said the AU’s commitment to the Palestinian push for independence was “unchanging and can only continue to grow stronger”.

Palestinian prime minister Mohammed Shtayyeh on Saturday called for Israel’s accreditation to be revoked, saying it “should never be rewarded” for its “apartheid regime”.

The AU normally prizes consensus, but it was unclear how a vote would have fared, with a two-thirds majority required to overrule Faki.

Instead a six-country committee will study the issue, diplomats told AFP Sunday.

Along with South Africa and Algeria, the committee will include Rwanda and the Democratic Republic of Congo, who supported Faki’s move, as well as Cameroon and Nigeria, the diplomats said.

Israel’s foreign ministry said the AU had “rejected attempts by Algeria and South Africa to revoke” its accreditation.

“The committee’s conclusions will be presented at the African Union Summit in 2023,” the ministry said in a statement.

Ethiopia peace push
It was unclear whether the summit, most of which took place behind closed doors, substantively addressed the 15-month war in Ethiopia, which pits Prime Minister Abiy Ahmed’s government against fighters from the northern Tigray region.

The fact that Ethiopia hosts the AU makes any intervention by the bloc especially delicate, and Faki waited until last August — nine months after fighting began — to appoint Olusegun Obasanjo as a special envoy tasked with trying to broker a ceasefire.

Ethiopia has also held a seat on the Peace and Security Council throughout the conflict, though it failed in its bid to stay on the 15-member body for the next term, diplomats said.

Adeoye said Sunday it was “not true” that the AU had been slow to respond to a war that has left thousands dead and, according to the United Nations, driven hundreds of thousands to the brink of starvation.

“There was no way the AU would not engage on such a situation given its exact location in Ethiopia,” he said.

Obasanjo will head to war-hit areas this week, and the AU will provide “experts from the African continent” to back up his push for dialogue, Adeoye said.

“We are all working for peace.”