AFCON 2023 Qualifiers: Super Eagles Get Easy Draw In Group A 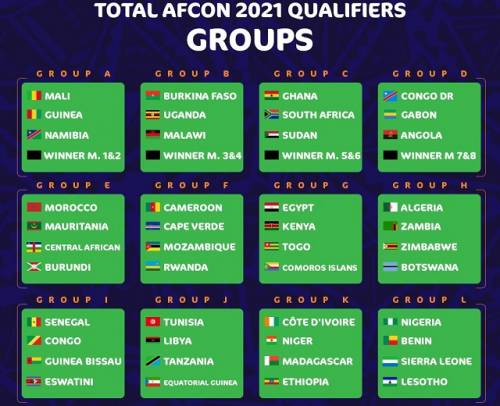 Nigeria’s Super Eagles have been handed a what should be an easy draw for the Cote d’Ivoire 2023 Africa Cup of Nations qualifiers.

According to the draw conducted by South African legend, Lucas Radebe and Cote d’ Ivoire striker, Solomon Kalou on Tuesday, will do battle with Sierra Leone, Guinea-Bissau and either Sao Tome and Principe or Mauritius.

The former African champions will play their game of the group against Lone Star of Sierra Leone. While Nigeria is ranked third best in Africa and 30th in the world, Siera Leone is 108, Guinea-Bissau (115) and Sao Tome and Principle (181). The top two countries in all the groups are through to the 24-team biennial fiesta in Cote d’ Ivoire.

Nigeria was dumped out of the last edition of the tournament in Round of 16 by the Carthage Eagles of Tunisia.

Meanwhile, the defending champions, Senegal is in Group L and will battle out with Benin, Mozambique and Rwanda.

Hosts, Cote d’Ivoire play in Group H with Zambia, Comoros and Lesotho. Only one team will qualify from this group, alongside the hosts. Comoro, one of the surprise packages at the delayed 2021 showpiece in Cameroon, is seeking for a second consecutive qualification.