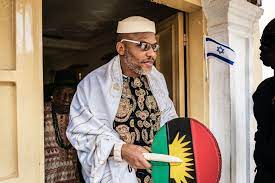 The Indigenous People of Biafra have rescheduled the sit-at-home order to Tuesday, January 18, 2022, in the South-East.

The group made this statement following Nnamdi Kanu’s court proceedings coming up on January 18, 19, and 20, 2022 at the Umuahia High Court.

The group said that there will be only sit-at-home on January 18 and not 19 and 20 and must be obeyed.

A statement by the group’s Media and Publicity Secretary, Emma Powerful, on Saturday, read, “Following our leader’s upcoming court proceedings on January 18, 19 and 20, 2022, we wish to remind Biafrans that there will be only sit-at-home on January 18 and not 19 and 20. In keeping with our avowed solidarity with our leader, the entire South-East will be on lock down only on January 18 for obvious reasons.”

The statement also tagged anyone found enforcing the non-existent Monday sit-at-home on January 17 as a criminal, saying that IPOB leadership had already canceled it and it must be obeyed.

The statement read in part, “Biafrans should understand that January 19, 2022, is the judgment day in the suit by our leader against the Federal Government, which is pending before an Umuahia High Court. So, there will be no sit-at-home on that day and on January 20.

“In keeping with our avowed solidarity with our leader, the entire South-East will be on lockdown only on January 18 for obvious reasons. We don’t want to compound the pains of our people, hence, we will limit the sit-at-home to only January 18. People are free to go about their normal businesses without molestations on January 19 and 20.

“Nobody is expected to interfere with either human or vehicular movements on those days under any guise. Any detractor or agent of darkness caught obstructing peoples activities in Biafra land on January 19 and 20 in the name of enforcing sit-at-home will regret his or her actions.”

The group further maintained that IPOB remains under one central command and control without any parallel or factional leadership.

“Everybody must be careful because these waves that are coming will consume many and every principal of IPOB, mostly the coordinators must know that it will bounce on their heads if they don’t checkmate the activities of members and call them to order. IPOB is not a village or social club where everybody will behave untowardly toward people like cultists.

“We expect our people everywhere to adhere to this directive and refuse to be misled by sacked members of IPOB in Europe and America. IPOB remains unshakeable, built and rooted on the rock and will remain so until the freedom for Biafra is fully achieved.”

Chicago 2021: A look back at the big stories of the year – WGN TV Chicago