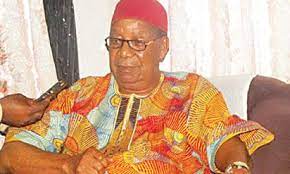 South-East will not accept vice-presidential slots from any political party in the 2023 presidential race, prominent Igbo leaders.

This statement was made by the First Republic Minister of Aviation, Chief Mbazulike Amaechi.

“What I want for the South East which has been so marginalized and so badly treated in Nigeria is the chance to be the next President of Nigeria, to bring about peace, to bring total reconciliation to Nigeria and togetherness in the country.

“President of Nigeria from the South-East is also going to restore peace, tranquillity and confidence in Nigeria. That is my first choice and priority.

“There are many prominent Igbo who can be president of Nigeria and even president of the United Nations. But there can only be one president.

“I called a meeting of Ndigbo on May 29, 2021, in my house, particularly the leaders of All Progressives Congress, APC, and Peoples Democratic Party, PDP. It was a joint meeting at my house. It was attended by people of South-East origin. I told them that the only way to get the office of the president is for the two political parties to nominate their candidates from the South- East.

“As far as I am concerned, any South-East person who will be president, whether he is from APC or PDP, or whatever party they like, is acceptable to me. I don’t care about the party the person belongs to. What I am after is for a South-East person to become the president of the country.