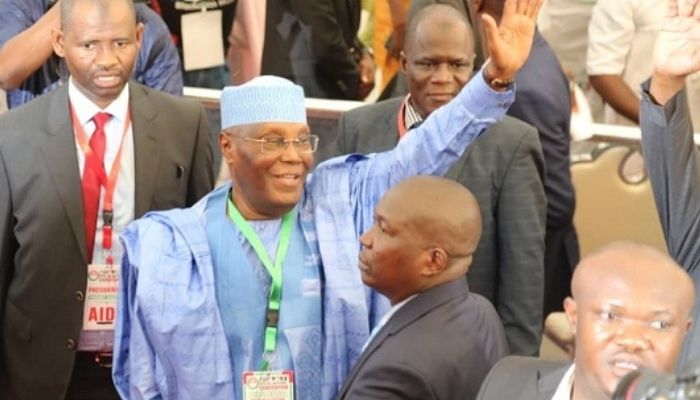 Delta State Governor, Ifeanyi Okowa, has emerged as the running mate to the presidential candidate of the Peoples Democratic Party (PDP), Atiku Abubakar.

Okowa’s nomination was announced and confirmed by Atiku himself on Thursday at an unveiling event of his running mate held in Abuja.

Atiku said he reached his decision after wide consultations with party stalwarts.

He said it was a difficult decision for him to make considering the quality of those that were recommended.

Below is his full speech at the event;

Let me begin by, once more, commending our great Party for organizing and concluding, arguably, the best and rancour-free Convention, which produced me as our flag-bearer for the next year’s Presidential Election.

Once more, I commend my fellow aspirants in that contest. I thank them for their sportsmanship. They put up spirited fights because they cared and care for our country. I have personally gone around to thank them and to seek their cooperation for the struggle ahead.

Party unity is critical not only for us to prosecute a winning campaign but also to provide good governance that our country seriously deserves and our people earnestly yearn for. The task of winning the coming elections will be a tough one and we must not take anything for granted.

With the convention behind us, we have arrived at the stage for me to pick a Running Mate because this is a joint ticket. I am very happy to announce today that I have reached a decision on that.

In arriving at the decision, I held wide consultations with various stakeholders in our party including our Governors, National Working Committee, Board of Trustees, and other leaders to seek their inputs and their wisdom.
In these consultations, I made clear that my running mate would have the potential to succeed me at a moment’s notice, that is, a President-in-waiting.

In other words, the person must have the qualities to be President. The person must have an appreciation of the deep rot which our country has been put into by the rudderless APC government; understands the great suffering that most of our people are going through and the urgency of relieving them of that suffering; understands the critical importance of economic growth and development to provide our young people with jobs, hope, and a pathway to wealth.

The person must appreciate the critical importance of education in the development of modern societies so we can prepare our young people to be able to compete in the increasingly competitive and globalized world.

My running mate must understand that without security, development will be very difficult because local and foreign investors who have been scared away already, would not return to invest in our economy. Thus, my running mate will be a person who will stand by me as a I confront the frightening level of insecurity in our land.

As you know, the APC government went to sleep as huge swathes of our country’s territory fell into the deadly hands of gangs of criminals, including those masquerading as freedom fighters or pastoralists, while our farmers and genuine pastoralists are unable to go about their businesses. The costs in precious human lives and properties have been enormous. My running mate must also not only symbolize the imperative of reuniting our country but also be able to work with me to achieve that objective. This is because a united Nigeria is a potentially stronger, more prosperous, and more secure country able to lead Africa and give hope to the Black race.

In addition, my Running Mate has to be someone who is not afraid to speak his mind and give honest advice, and, be by my side as I work very hard to reverse the destructive impact of the past seven years of the APC government.

In the United States of America from where we borrowed key aspects of our current Presidential system, a running mate is used to balance the ticket, complement the candidate and, after victory, assist the President with governance. Sometimes a candidate is chosen who generates a buzz and adds huge excitement to the campaign.

But today in Nigeria, we face huge challenges which leave us little room for drama. We have to win the elections and get to work immediately. My running mate has to be ready to start working with me, from day one, in addressing our country’s challenges. Nigerians will not accept anything less. That is why I promised the Governors of our party that my running mate will come from among them. Our current challenges call for a government that is highly focused and disciplined.

I have sought for the support, guidance, and counsel of the PDP in selecting a befitting Running Mate who meets all or most of the qualities enumerated above. The wisemen and sages of the Party, put together by our NWC, have gone fishing and brought home an enviable group of awesome politicians that surpasses these qualities. Every one of the recommended persons is a fit and proper individual to hold this office. While this makes me marvel at the bundle of talents that abounds in our Party, it also compounded my task of choosing a single person from among them.

Let me therefore pay tribute to my Party and, most especially, to all those that made the shortlist that must now be narrowed down to a single person. They are all dedicated party-men suitable for this task. I wish all the recommended persons could be announced today as my Running Mates. Unfortunately, only one MUST be chosen.

It is a difficult decision that I am called upon to take. But, as someone hoping to lead a complex country such as ours, tough and difficult decisions would remain a part of my everyday life.
Let me, therefore, start this momentous journey with a crucial decision about who, among the eminently qualified shortlist, would be my Running Mate.

Accordingly, [b]let me state that the person I have chosen as my Running Mate possesses all those identified qualities. He personifies not only the seriousness the current moment represents for our country but also the future that our young people yearn for and deserve. He is a serving State Governor who has demonstrated, in his State and through his conduct, that governance is about service to the people.

I know that he will not only add excitement to our already energized ticket and campaign, but will also help to bring focus, discipline and stability to our government, come 2023. I am pleased, therefore, to announce here my choice of Running Mate who will help to lead us to victory next year not only in the Presidential election but also in the governorship and legislative elections. And he will be by my side as I work hard every day to provide our people with security, revive our economy, improve education and unite our country. He has both Legislative and Executive experiences. Please join me in welcoming to the ticket the next Vice President of the Federal Republic of Nigeria, His Excellency Governor Dr. Ifeanyi Arthur Okowa.[/b]

One Convicted For Cybercrime In Oyo

EFCC Cautions Youths Against Fraudulent Use of ICT