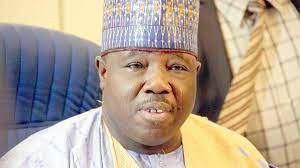 Former Borno State Governor Sen. Ali Modu Sheriff has denied having a presidential ambition ahead of the 2023 general election, saying he cannot be distracted from his bid to superintend the ruling party.

Sheriff made the clarification Friday in Abuja in reaction to media enquiries to that effect.

The former senator also chided the Peoples Democratic Party PDP for thinking it can dislodge the APC, saying whatever the opposition is banking on, the ruling party is ten times better.

“Some people said he is pretending, that he is looking for a president and not party chairman. I want to put it on record. I am not contesting for president. I want to be the APC national chairman so that I can lead a campaign like what we did before to ensure that our leader President Muhammadu Buhari hands over to another APC member.

“If I want to be president, I won’t be afraid to say it. I am not afraid of anybody. Whosoever we decide to be our presidential candidate, I will support the person and lead the charge if by God’s grace I become the national chairman.

“I am running for national chairman and I want is to help the president to maintain his legacy by handing over to someone from the APC.

“Some people are afraid because they know that I am competent to do what I am aspiring to do”, he stated.

He also stressed the need for the APC to work harder to retain power in 2923 seeing as President Buhari will no longer be on the ballot.

“President Buhari came with over 12 million votes and he won’t be on the ballot in 2023, which means that we need to work harder.

“We have to work and we are set to work. All those doubting Thomases that believe that APC has gone to sleep are in for a joker”, he declared.

“By the time we finish our Convention, the opposition will go back to their drawing board to start from zero because they know us and we know them because in Nigeria’s political equation, everyone knows everyone.

“We are stronger than them. It is APC and the others. We have a strong media base, strong intellectuals and many others. So, whatever they are banking on, we are ten times better than them.

“Before we came, 24 local governments were under the hands of insurgents under the PDP and we could not go home. Today, the situation has changed. So, security has to be a collective business. Yes, we still have challenges in some parts of the country but I believe that before the president leaves if he could find a solution for the North East, he can also find a solution for the North-West”, he added.