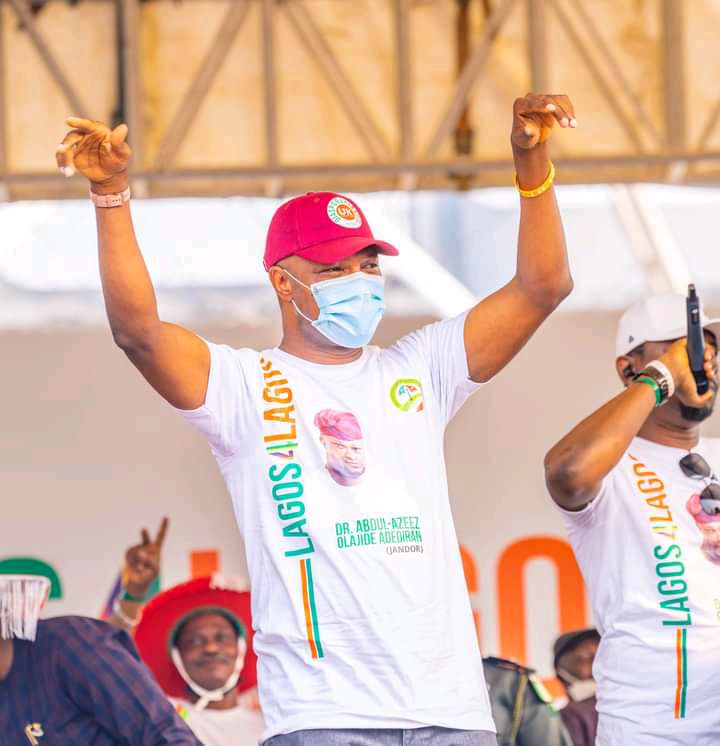 The Peoples Democratic Party (PDP) on Friday endorsed Dr. Abdul-Azeez Adediran aka ‘Jandor’ as an aspirant for the Lagos gubernatorial race in 2023.

Jandor, 44, is a journalist and the convener of the Lagos4Lagos Movement, an All Progressives Congress (APC) group which recently defected to the PDP.

Six PDP governors, led by the party’s National Chairman Dr. Iyorchia Ayu, alongside party stalwarts from across the country gave the endorsement during a rally at the Tafawa Balewa Square (TBS) on Lagos Island.

He added: “Jandor is not only important but he is strategic. Our presence in this meeting today is an endorsement of the fact that the PDP is the only democratic party in Nigeria and if we say that you are one of us, you are indeed one of us in truth and spirit, that is why all the governors left everything today to join the National Chairman to welcome this very, very important bridge builder.

“It is the bridge that will transit us from a geriatric government to an active government populated by youths.

“I, therefore, ask members of the PDP in Lagos State to give him maximum support and cooperation so that he will contribute his quota to the growth of the party.

“May I also ask that Jandor see his brothers and sisters – those already within the party – as part of his own family. So that together as we rescue Nigeria, we’ll rescue Lagos alongside.”
Ayu welcomed Jandor and his supporters to the party, adding that he was hopeful of victory at the polls.

He said: “I lived in Lagos for many years, I was happy. Today, I know you are not happy because you gave your life away to people who deceived you about change. Are you enjoying the change? How much is the value of rice?

“We thank you for coming over to the PDP. Go back and tell everybody that this time next year, we are coming back to celebrate a PDP governor.”

Wike, who spoke in pidgin, urged the people to support the aspirant for victory at the polls.

Jandor pledged to add value to the PDP, adding that he and his supporters would submit themselves to a “fair contest” within the party.

He said: “We have joined a party where we are ready to submit ourselves for a very fair contest. Today we have declared for the PDP and be rest assured that we are going to join the existing members of the party to win for the party, not for ourselves alone.

“And to all, we are here to add value, not to destroy the existing structure. We are here to be part of the big family and together we can take Lagos and return it to Lagos.”